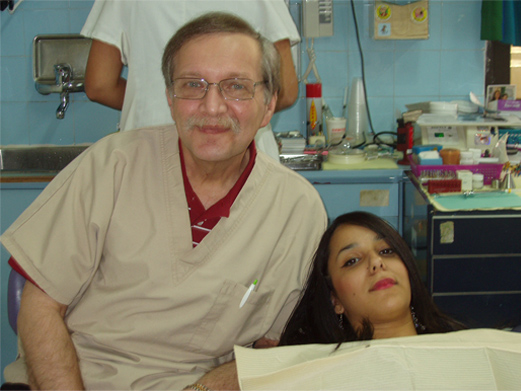 Dr. Mark L. Schleider arrived in Tel Aviv from Danbury, Connecticut, on December 2nd, 2011, to enjoy Israel and see the many members of his family. He then went on to Jerusalem on December 9th to spend a week volunteering at the Trudi Birger Dental Clinic, through a special program called Dental Volunteers for Israel (DVI). DVI provides free dental care and oral health education to thousands of needy children in Jerusalem every year, regardless of race and religion, thanks to the benevolent support from our friends and visiting volunteer dentists from around the world. This was Dr. Schleider's second visit to volunteer at DVI. He has since returned for a third time to Jerusalem from August 10-17th, 2012. His latest trip to be at work in the clinic was during the week of October 20, 2013. He gives as his reason, “I have wanted to volunteer as a dentist with DVI for a couple of years and the opportunity finally arrived when the timing was perfect. I have retired from practice after forty years and now have the time to devote myself to charitable efforts.”

Dr. Schleider stayed in Jerusalem's charming Rechavia neighborhood and loved the apartment provided by DVI. “Working in the clinic and living in a regular apartment in an Israeli neighborhood was a special experience, because I got to feel like part of the community, like I belonged here, not just a tourist. I went shopping at a neighborhood grocery store and was treated like a local. I walked parts of the city and felt like I really got to know Jerusalem.”

He has since returned for a third time to Jerusalem from August 10-17th, 2012. He gives as his reason, “I have wanted to volunteer as a dentist with DVI for a couple of years and the opportunity finally arrived when the timing was perfect. I have retired from practice after forty years and now have the time to devote myself to charitable efforts.” His latest trip to be at work in the clinic was during the week of October 20, 2013 (after August 10-17th, 2012).

Though there are a significant percentage of needy children in Jerusalem, dental care is often more of a necessity for them than it is for other children – as their dental problems are typically far more severe than children in better economic situations, who typically have better diets and superior hygiene habits. Poor children desperately need dental care to do well in school – and when they don't get it, the education gap is formed and held open by their suffering. The attendance and performance of these children in school is directly related to their success in escaping the cycle of poverty. DVI provides critical basic services to the poverty stricken communities of Jerusalem – with a total population of a mere 800,000, Jerusalem has over 200,000 children living under the poverty line. Volunteer dentists from around the world, together with their Israeli colleagues, perform between 1,000 and 1,200 treatments each month.

In 2010, 149 volunteer dentists from around the world performed 14,315 treatments, helping thousands of needy Jerusalem children stay in school. But it's not just about quantity — DVI works hard to maintain high standards of care, in the belief that every needy child should receive the same level of care he or she would get if their family could afford treatment. A faculty member from Hebrew University's pediatric department is always supervising in the clinic and a Hebrew University pediatric resident regularly rotates through. Dr. Schleider states “DVI's Trudi Birger Clinic is well-equipped and the staff is very dedicated and knowledgeable. The dental assistants are wonderful with the children and make it a pleasant experience for both kids and dentists.” During the past 31 years, over 4,500 dentists have volunteered at DVI. And that's part of the reason DVI is the most cost-efficient free dental clinic in Israel because the dentists are all volunteers and in addition, the supplies, materials and even some of the equipment is donated by major manufacturers and distributors in the U.S., like Henry Schein and Premier – thus, the clinic's total operating budget remains a fraction of what it would cost to operate a clinic this size (we have 5 dental chairs, a 6th dedicated X-Ray chair, plus a 7th dedicated to a full-time hygienist) anywhere in Israel. Most volunteers are general dentists and periodontists, but there is a need for help from other specialists – in particular, endodontists.

Thanks to the influx of volunteers, in the last two years DVI has had all dental chairs occupied almost every week of the year and has thus been able to increase its patient load – however, DVI has seen a couple of difficult years financially, with donations down. While an observer visiting the clinic will see an amazing diverse picture of kids receiving badly needed dental treatment and being educated about nutrition and prevention of dental problems, the clinic is in need of funds to purchase new equipment and help provide more treatment to the special kids treated at DVI. Nevertheless, the clinic is thriving.

And in keeping with Trudi Birger's philosophy that true “tsedaka” (charity) means giving to others not what you would otherwise discard, but what you would want for your own children, DVI strives to provide the poorest kids with the highest level care in the State of Israel. Thus, clinic policy is such that endodontists perform root canals. And the clinic is well equipped for this, with a variety of instruments for visiting endos and a microscope.

The DVI clinic is actively looking to recruit more volunteer endodontists, so if a working vacation in Israel sounds good, please email international@dental-dvi.org.il and schedule your trip today! Or for more information on DVI, please visit www.dental-dvi.org.il

Dr. Schleider practiced in Danbury, Connecticut and Brewster, New York before his retirement. He served as President of the Connecticut Association of Endodontists from 2009-2011 and may be reached at drroot111@aol.com.